A Saturday Morning At Work

Who want to work weekends? Exactly. I’ve been there – done that, and dread the day I have to do it again. Though – on occasion going in when you typically don’t can bring unexpected enthusiasm. That’s my morning. I woke at 6 am paranoid that I’d overslept. Reasonable considering I normally wake to darkness and, instead, today was met by a light filled room. You know – that pretty orange new day light that makes everything sorta glow?

From there work was a joy. Really. It’s a two hour show normally anchored by the amazing Kontji Anthony. Because it’s a weekend show there is more room for community interviews – today I talked to a group working to support the new unified Shelby School District along with other groups preparing for school.

Then there were the kittens!!! Heaven for a cat woman. I’d have 20 if I could, but I’ve seen first person what that does to furniture.

Most reporters live for breaking news. I know I do and always have. I got lucky because Action News 5 is the breaking news station in Memphis. When we get details of a breaking situation our team moves into ACTION like a well oiled machine. It’s fascinating to watch and amazing to be a part of . Chopper 5 is up in the air. The emails are fast and informative. The producers are on the phone explaining what they need and giving me all the latest information they are getting back at the station.

It was one of those situations this evening. I got off the set at 5pm from anchoring my daily hour-long 4 pm show. Photog Chris and I were assigned to cover a story in Arkansas so we swung by Lenny’s to grab dinner for the road. I’d paid and was waiting on Chris when three or four police cars sped by the shop. One or two cars wouldn’t phase me, but four….I knew it was something. Within seconds my phone was ringing. And like that :: our day changed. An officer had been shot while chasing a carjacking suspect.

We hustled to the scene and were met by our live truck. I had about 20 minutes to talk to witnesses and gather as much info as I could before I went live from the scene at the top of the 6 pm news. The link below is what we were able to do in a matter of 20 minutes. There wasn’t a lot of information, but thanks to our resources were able to show you the scene, the scene from the air and the officer being wheeled into the MED, our hospital, all LIVE. Powerful TV. Powerful team. It’s tough because most of the video I’m talking about in the show below I haven’t seen and can’t see at the time. I’m relying on what my producer is telling me about it in my ear :: all while continuing what I’m saying. In this situation there was so much noise around me, I could barely hear her, but that’s how it is.

It doesn’t end with this. As soon as the shot was off me, photog Chris and I had to start working on our 10 pm newscast. The police department then held a fast interview where we were finally able to get solid details. The actual who, what, when, where and why. Next, we had to get interviews from people who live in the area and actually heard or saw the shots fired. People are always very hesitant to go on television, so this can be an exhausting part of the job. There were so many people standing around and you literally just have to go up to everyone and ask if they saw or heard anything. A number of them will always say something rude to you, but in the end it’s the job. With all my elements in hand, I now had to write my story for the 10 pm newscast.

This is where I write

Cramped up in our live truck

I usually write my package on my i-phone and send it to my producer. Once she (the awesome Samantha) gives it the go ahead, I record my voice for my story in the truck. Then it’s up to photog Chris to work his magic.

This is Chris Mitchell :: My main man :: referred to as Photog Chris on my social media posts

While he edits our story, I update facebook and twitter with my story information and prepare for my 10 pm live shot. Here’s our final product tonight. Forget looking good. I couldn’t even keep my hair out of my eyes. I’m lucky I got some lipstick on.

I realized right before my hit that I was standing in ants :: yep, did the ant dance

Tonight I was so mentally tired. I rushed home to put on my pajamas and eat ice cream straight out of the carton. I wish my buds and mom and dad could come along for one of these evenings. Not that I’d have time to chat, but I’d like them to see how fast and detailed it all is. There aren’t boring days in this job. I really love what I do. The stories we cover are often terrible and upsetting, but it’s the fact gathering and process of getting it on air that I’ve yet to get bored with. I don’t think I ever will. It’s that intense. Until next time.

By Lindsey and Kiara

A friend greeted me for dinner last night with two of the neatest gifts. A vintage Chopper 5 toy and Action News 5 magnet.

The helicopter actually works, well it doesn’t fly, but it does scoot around on the ground! 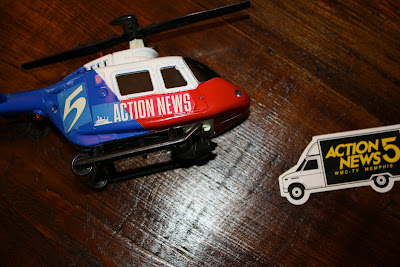 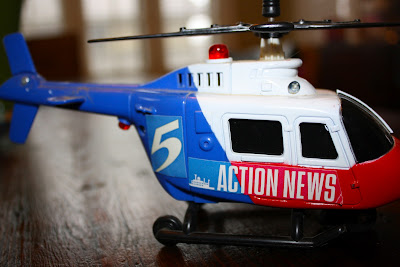 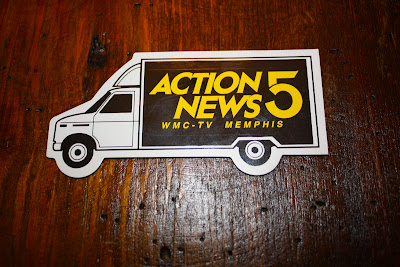 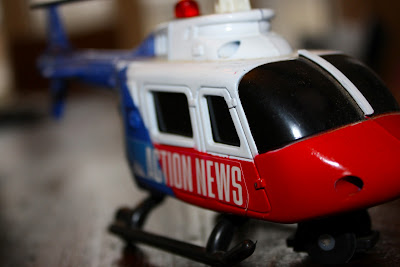 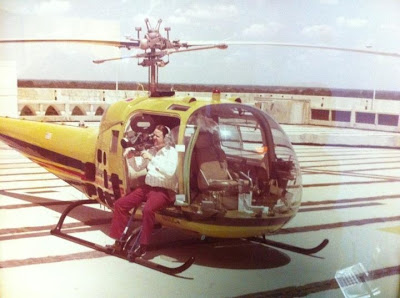